We hosted a free webinar about Post Adoption Depression Syndrome; a syndrome which affects around 20% of adoptive parents. You can access the recording here:

The following blog was written by an adoptive mother who has experienced Post Adoption Depression Syndrome.

My husband and I had been trying to adopt an infant domestically since October 2012 through LSS/Children’s Home Society of MN. I won’t go too deep into the process we went through, other than to say it was difficult. The training, evaluations, home studies, etc. as well as just waiting in line for our turn to move onto the next of many steps took a very long time. Therefore, it wasn’t until March 2014 that we were finally put into the “Waiting Family Book,” which is what prospective birth families look through when trying to decide on a family for their unborn child.

I really thought 2014 would be our year, but New Year’s Day 2015 soon came and went and the discouragement was overwhelming. Because we hadn’t had any luck, we decided to redo our profile. Luckily, though, we never got around to it because on January 20, 2015 I got *the* call.

On the line was a woman from northern Minnesota who had just had a baby boy five days prior. He was born five weeks premature with a condition called Gastroschisis, which means his intestines grew outside of his body. This woman saw our profile and felt like we could possibly be the right choice for her son. He had been flown down to Children’s Minneapolis and she needed to find him adoptive parents ASAP as she couldn’t be there with him, so he was all alone.

Over the next two days we got to know the birthmom “S,” and she ultimately asked us if we would agree to parent this little boy. We did some research and decided we would be willing to go forward with the adoption, so on January 23, we got to meet our son for the first time, whom we named Finnigan Patrick.

Finnigan had had his second surgery the day prior and all of his intestines were now back inside his body, but the poor guy was in rough shape. He was intubated, had two IVs and a PICC line, as well as a catheter and tons of different monitors. He was being fed intravenously. It was hard to see.

Finn spent a total of 18 days in the NICU, where he eventually learned to breathe, feed, and stool. His recovery was miraculous and we were able to take him home on February 2, weeks earlier than projected. Unfortunately, that was only the beginning of some very real struggles. 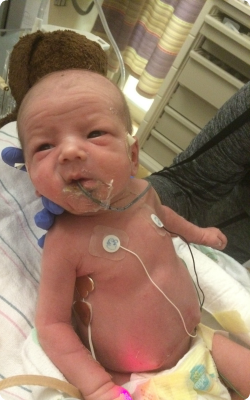 I think parents, women especially, have this idealized version of how things are going to go down when they first meet their child – adopted or biological. I had been waiting almost 11 years to become a parent, so I just assumed that once I met our son, I would fall head-over-heels in love with him. I was therefore disappointed and concerned that I didn’t. I mean, he was adorable and I instantly wanted to snuggle him, but he was a complete stranger. I felt nothing more for him than I felt for every other baby.

In addition, domestic infant adoptions go through something called the “legal risk period.” This means that for a certain amount of time the birth parents can take back the child. Our legal risk period was not over with until March 10th, so until that time I was convinced that Finnigan would be taken away from us. It is hard to bond with someone who you think will be leaving you. I don’t think I have ever been so stressed than I was during that time. For lack of a better word, it was hell. Still, even after the legal risk period was over, I struggled with attachment. It was truly beginning to scare me.

I am the type of person who refuses to keep scary feelings to myself. I learned through therapy years ago that the best thing is to talk about what I am dealing with, so I searched out a Facebook group for secular adoptive and foster parents. There I learned the shame I was feeling – and more importantly, the lack of attachment – was 100% normal. While this is something seen in most adoptions, lack of attachment is also often experienced by biological moms and dads. You are meeting a new person for the first time; you can’t make yourself feel something that is not yet there, especially if you are afraid they will leave you.

I was so relieved. I had been worried that my feelings were abnormal and would mean that I wouldn’t be a good mom. I was glad that those feelings of shame were unfounded. I also learned that total attachment can take months and months, but to also not put a timeline on it. I’m glad I listened because now that I don’t feel that pressure, bonding has started to come and more and more I feel like Finnigan is my son. We still have a ways to go, but we are progressing.

I wish we would have learned more about this in adoption training. I wish I would have known going into this that what I was feeling was totally normal. Because it is. Unfortunately, Finn’s discharge was not the end of his medical problems. For six weeks we struggled badly; he screamed and cried almost 24/7. I didn’t sleep, nor did he. But I didn’t give up and I did all I could to make him more comfortable.

Then, come mid-March, Finn spiked a fever and refused to feed. After two ER visits, he was readmitted to Children’s with an ileus, which means his bowels had stopped moving. Over the next 6 days, he was also diagnosed with a severe dairy allergy as well as bacterial overgrowth in his intestines.

In reality, this hospitalization was a good thing. Once on new prescription formula, he smiled for the first time and he started sleeping. He also got signed up with early intervention through the school district, where he gets OT and PT in our home for free. In addition, he was put on a monthly antibiotic regimen plus a pain relieving drug.

Unfortunately, though, this hospitalization broke me. I felt like a complete failure. Once he was discharged, I fell into a deep depression. I didn’t want to hold him; I didn’t want to interact with him; I just wanted to sleep. His cries would send me into a petrified panic. What if he was getting sick again? What if I was failing him a second time? I felt completely lost and terribly depressed.

Again, much like with the attachment issues, I knew this was not normal so I reached out to my support group. There I learned that I was suffering from Post-Placement Depression and Anxiety. Very similar to Postpartum Depression, which many biological moms suffer from, I was dealing with the effects of long-term stress, sleep deprivation, and hormones. Again, there was nothing to be ashamed of.

It took several weeks, as well as a short-term medication and LOTS of support from family and friends, to get back on track. But I did. I made it through. And yet, how I wish I had known about this condition prior to adopting. It was a frightening thing to experience all by myself, with no warning. Finnigan is almost five months old and was just officially adopted last week. It surely has been a whirlwind of an experience. My hope is that someone will read this and feel a little less adoption shame themselves. We live in a society where deep, emotional stuff like what I went through is seen as a weakness; even a taboo. That’s why I wrote this; I want to stand up for those who are too afraid to do so themselves.

The biggest piece of advice I can give you is to remember that it *does* get better. It takes work – and dare I say – courage. But it gets better. So reach out to someone, and don’t give up. It is all worth it. I promise.

About the Author: This blog was written by Emmy Rinke, an adoptive mother. This blog was originally published on pocketyourdollars.com.