There are many things to praise about Tour Korea, but I will focus on three:

First, extraordinary staff accompanied us. A birthland tour for adoptees is not a typical sightseeing jaunt. There are serious, emotional components for children and parents that may, and probably will, arise. Tour Korea allowed families to meet personnel from Korean adoption agencies that had managed their child’s placement and to meet, if possible, the foster families and birth parents of the adoptees. The extraordinary preplanning by CH/LSS that allowed these meetings to happen was impressive.

This is not a process to be undertaken lightly. Depending on your family and circumstances, it could be emotional, arduous, joyful, unexpected, heart-breaking, and/or surprising. The CH/LSS staff who accompanied us and mediated the process included an LCSW, a parent who had adopted children from Korea, a Korean adoptee, a translator, and a tour director who was both an adoptee and an adoptive parent. This skilled and personable team guided families through the many feelings that could and did surface during the trip. Each family received personalized attention and inclusion in all follow-up group discussions. 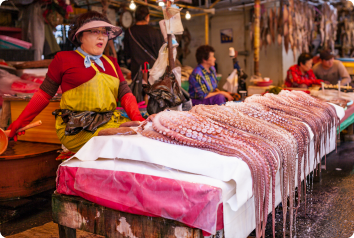 A second praiseworthy feature of the tour was the focus of the tour itself–to make the adoptees and their families understand what it meant to be Korean and to be proud of the rich, varied, and ancient Korean culture. To be sure, we went on many sightseeing excursions, we went to amazing shopping districts, and we stayed in excellent hotels. But we also ate traditional Korean foods every day—not just the fabled Korean barbeque—and learned about traditional Korean crafts, clothing, and history. We visited the DMZ and we toured a car factory. More remarkably, we met women who had made the wrenching decision to give up their children for adoption and learned why they had made those decisions. We also talked with unwed mothers who were getting support to raise their children by themselves.

Highlights of the tour for our family were a host family dinner and our time spent at a Korean Boys’ High School. Each Tour Korea family was entertained in a private home and welcomed into that family’s life as well as served a wonderful meal. My family was entertained by a lady, her two daughters, her 75-year-old mother and three dogs. With the help of Google Translator we laughed through delicious chicken hotpots, learned that we had many of the same concerns and that we all loved dogs. Our trip to the Boys’ High School was a boisterous reminder that the youth of a country are its treasures. We visited a 10th grade English class and participated in the wildest game of Charades I’ve played in a long time. Finally, the third aspect of the tour that I treasured was the opportunity to meet amazing families, each on their own reunion search. People on the tour ranged in age from 12 to their mid-70s. I was among the oldest. My daughter was the oldest of the returning adoptees; the youngest was 13. There were university professors and members of a Minneapolis police force. Each family’s story was different and yet the same. We all were searching for answers and we all had a strong desire to know more about Korea.

Our daughter did not find her birth parents or even clues as to who those people might be, but we did not expect that given the length of time that had passed. CH/LSS staff did take us to Incheon, to Star of the Sea Orphanage, now expanded across a modern and welcoming campus. We got to review her file there and meet the amazing Mother Superior who, with a staff of 10 and many volunteers, looked after over 90 children under the age of 7. Our daughter was able to find out the exact date she entered the orphanage, on what street she had been found, and what her condition was. This really was more than any of us expected and could not have happened without the CH/LSS staff and translator. She also was able to leave a DNA sample in the Missing Person Database.

This tour made memories that will live throughout my life and the lives of my daughter and grandsons.

About the Author: Mary attended Tour Korea in 2018 with her daughter and grandsons.