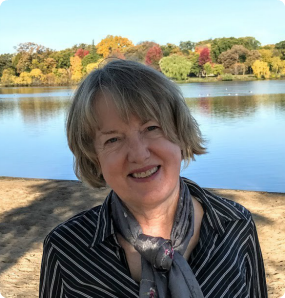 Five years ago, I took a writing class at The Loft that focused on writing about race. I had much to ponder about this subject because I have two internationally adopted children: a son adopted from South Korea at 4 months of age and a daughter adopted from Guatemala when she was 6 months old. The essay I submitted to my instructor, David Mura, interwove my relationship with my mother and daughter, using a quilt as a metaphor. When I met with Mura to review my essay, he offhandedly said, “You should turn this into a book.” And so I did, despite the fact that I had never written a book before. My memoir Missing Mothers was published on Amazon April 1, 2019. Writing and publishing the book has been a transformative experience.

My own birthmother died during childbirth when I was 6 years old (the infant survived). I cannot remember her. As a young woman, I approached motherhood with an extra incentive. I wanted to recreate her birthing story, with a happier ending. I magically believed that her grandchild would bring her back to life. I hoped such a child might even look like her or inherit her musical talent. (My adopted daughter is musically gifted.) But infertility intervened. I was not amused by this irony: my mother dies giving birth and I am denied the opportunity to give birth myself. Thanks in part to my wise and loving husband, we turned to adoption. At the time transracial and cultural adoption offered the quickest route to becoming parents. As I write in the book, I wasn’t entirely ready to become a South Korean baby’s mother, still caught up in my grief about the loss of a biological child and not sure my childhood bereavement prepared me properly for motherhood. But the minute I held my son in my arms, I fell in love. The same was true of my daughter, adopted two years later.

I wanted to tell two stories in my book, about myself as a daughter and as a mother. Since I can’t remember my mother, I wanted to bring her alive on the page so others wouldn’t forget her. Makes perfect sense, right? But her story would necessarily be intertwined with the story of my mothering experience. I knew from the beginning that it would be a lot easier to write about the dead than about the living, especially when those living are one’s children. All I could do was try to balance writing as honestly as I could without betraying my children. Only they can tell if I succeeded. A book isn’t worth reading unless, in the course of the narrative, the protagonist shows signs of growth. In my book, I am the protagonist. And I did grow. I learned that losing one’s birth mother to death is different than losing her through adoption. I apparently have more yearning for my birth mother than my children do for theirs. Perhaps this is because of our individual personalities. Perhaps it is due to the fact that I was with my mother for six years, whereas my children were separated from their mother shortly after birth, as far as we know. Perhaps my children fear that searching for their birth families would hurt my husband and me. My son lived in Korea for six years and chose not to search for his birth mother. My daughter, who last visited Guatemala at age 12, doesn’t want to visit again due to the poverty she witnessed. Perhaps my children will change their minds about this as they age or become parents.

What else did I learn? When my children were adopted not much was written from the perspective of the adoptee. By the time I started my book, this had changed. I tried to read as much as I could by individuals who were transracially adopted. I went to plays written by adoptees. I learned that, especially in Korea, many adoptees have returned to visit, to search for birth family, and even to live. A group of adult adoptees has been instrumental in changing adoption laws in the country to give birth mothers more options as they consider their choices.

I wasn’t able to reach a conclusion about the rightness or wrongness of transracial adoption, although I do acknowledge the way in which racism and white privilege plays a role. I know my children have experienced some racial discrimination. I regret the way in which adoption has complicated their lives. My son is philosophical, saying he believes he could have been happy growing up in either culture. My daughter simply says she is glad she lives here.

At the end of the passage in which I consider the morality of transracial adoption, I close with these words:

It is too late for John and me to reconsider our decision to adopt our children. The best we can do is listen when they choose to share with us the feelings they have about adoption, culture, and race. We can validate the way in which their lives have been made more difficult by decisions we made long ago, while identifying what we can do in the present to respond to these difficulties. We can recognize the ways in which values we tried to teach in our home, such as honesty, responsibility, and empathy, might arm them against racist attitudes. We can ask, although we can’t answer for them, whether their personal experiences allow them deeper and wiser insights when it comes to race relations and white privilege.

Demographic trends in the United States suggest that by 2050 white people will be in the minority. John and I hope it comes to pass. Our pasts were formed by the choices of our European ancestors. But our future belongs to our children. Our loyalty lies with them.

Writing this book taught me that I can acknowledge my lifelong sadness about the loss of my mother and about infertility while also celebrating my good fortune. I am blessed to be the mother of my children. Grief could have paralyzed me, but instead, it propelled me toward a joyous life.

You can purchase Martha Bordwell’s book Missing Mothers on Amazon.