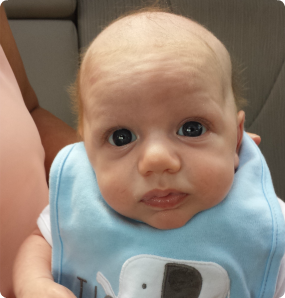 In 2012, we applied to the Domestic Infant Adoption program at LSS of Minnesota. When we made the decision to add to our family through adoption, the decision came loaded with a lot of worry. Worry if it would really happen, worry if we could love another child as much as our first born, Chase. Worry about having an open relationship with birth parents and feeling like we would never have private family time anymore. As milestones in our adoption process passed, the worry remained. That is, until it didn’t.

On a sunny June day, approximately 18 months after we began our adoption journey, we found out that our son, Ian, was born. Ian was two weeks old when we learned that his birth mother was interested in our adoption profile, but there was still more waiting to do. A week later, we met our son’s birth mother and his birth grandparents for the first time. That meeting was the beginning of our two families becoming one.

Two weeks after our initial meeting, our social worker, Kristen, called to tell us that Ian’s birth mom had made her decision. A decision that would change her life, our life and most importantly, Ian’s life forever. She chose us to be Ian’s forever family: to raise him, love him, guide him and teach him about his adoption story. And he would be joining us in two days! I will never forget her voice and that moment.

On June 18, 2014, we woke up as a family of three. But as we walked into the Bridge Care home in which Ian had spent his first five weeks of life, we became the family of four that we had dreamed about and prayed over. It was a day full of emotion. A life changing moment for two families. The start of a love that is indescribable. On October 23, 2014, two years after we started the adoption process and four months after we met Ian, our worries melted away. Ian’s adoption became finalized in court, and we were surrounded by our family and close friends. On this day, we closed a chapter in our lives filled with heartache, and despair over our desire to have another child. On this day, we opened a new chapter. A chapter where our family story now includes a mom, a dad, a big brother and a little brother, a birth mom, a Nana and Papa!

It has been almost a year and a half since Ian came into our lives and forever became a part of our hearts. During this time, we have had more moments than we can even begin to share where we are reminded that our family and Ian’s birth family were chosen for each other. We look forward to our visits the first Sunday of each month and welcome visits in between as well. Ian’s birth family was present for his baptism, and we celebrate holidays and Ian’s birthday together.

In a way, our children have both been adopted: Ian was adopted by our family and our oldest son Chase, has been adopted by Ian’s birth family. It is absolutely amazing to share an open adoption with a birth family as incredible as Ian’s.

An important part of adoption is being able to share your child’s adoption story with him from infancy to adulthood. Because of the great relationship that we have with Ian’s birth mom, we know that we will all be walking along side of Ian together: sharing that story, helping him understand the meaning behind his birth mom’s decision, and enveloping him in the love that we all have for him.

About the Author: Mali is an adoptive mother through LSS.