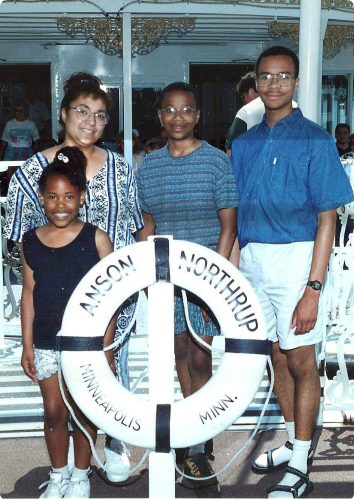 I remember being 8 years old standing in my mom’s kitchen with my two older brothers when she all of a sudden said to me “you’re adopted.” As I sat there confused, she began to explain what that meant. My adoptive mom is also adopted, so she knew exactly how to have this conversation. I didn’t really care, this was the only family I had ever known, so I carried on with my life not thinking twice about it. I had a great childhood. My adoptive father raised me and my two brothers. My adoptive parents separated shortly after I was adopted, and I still saw my adoptive mom on weekends.

I had very little information in my adoption paperwork that was left by my biological mother. She was 23 when she passed away from Hodgkin’s Disease. When she was pregnant with me, and she had the option to continue her chemo and terminate her pregnancy or stop chemo and continue her pregnancy with me. She chose to continue her pregnancy, and I will forever be grateful. She said that her mother was the only person she told about this pregnancy. She said my father was of African descent, but didn’t leave a name. I also had an older sister that she did leave a name for. I would dream all the time about meeting my sister, and how we were going to be best friends and hang out all the time.

When I was 18, I woke up one day and decided I wanted to try to connect with my biological family. I was a little leery since my adoptive father had always told me I was adopted because my skin was too dark. Whether this was true or not, I didn’t know, but I figured I’d give this all a shot and see what happens.

As we searched in several different ways, my adoptive mom ended up finding my older sister on Myspace. She wrote to her and my sister called us the same day. Everything was explained to her and she was in shock, as they didn’t know about me at all. She informed us that I actually had another sister as well, my biological mother had 3 girls, and I was the youngest. I was so excited. It just so happened to be my older sister’s birthday, the day we found her. We ended up all meeting for dinner. I was hoping that we all had the same father so that I’d be able to meet him as well, but I soon found out that they both had the same father, but I did not. I still held out hope that someone in my biological family would know who my father is.

“Everything hit me at once. Who am I? Why was I adopted? Who is my biological father? Why didn’t he keep me? Why was I a secret? I suddenly felt lost not knowing the answer to these questions.”

Everything was going well; I would hang out with my sisters all the time. I couldn’t have been happier. I began meeting people in my biological family. I was embraced by some, others not so much. My biological grandmother was one of those people. She never wanted to meet me and to this day, I’m not sure why. This devastated me, as I’ve never had grandparents that lived in the same state as me. I was really looking forward to asking her so many questions about my biological mother and maybe she knew who my father was, but I never got the opportunity. I always wondered why certain people were against meeting me. After all, I was family, all I’ve ever wanted was just to know where I came from. I was told once that some people were upset in finding out that my biological mother “gave up on life” by choosing to continue her pregnancy with me and not continue chemo. I was starting to feel like there was more to this story. It really affected me in a negative way. I felt rejected for a second time since there’s a certain sense of rejection just in the fact that I was adopted and my other sisters weren’t. I continued on, meeting the people who wanted to meet me and trying not to worry about the ones who didn’t. This was all a lot to take in, and so emotional, so I decided I was done searching for any more answers to my story. Over the next couple of years, my relationship with my sisters began to fade for no other reason than we were just all in different places in our lives. We were starting to have kids and move and just got into our own routines. It eventually got to the point where we never talked at all. I was fine with this for years—until I hit my 30s.

Everything hit me at once. Who am I? Why was I adopted? Who is my biological father? Why didn’t he keep me? Why was I a secret? I suddenly felt lost not knowing the answer to these questions. This began to consume my life, I’d think about it all the time, I’d cry at random times, and I eventually fell into a deep depression. At the time, I lived in the same area as my biological family, so I would see my biological family out and we would barely speak, sometimes not at all. I’d see them hanging out on social media and say to myself I should be there. Even though I have a great adoptive family, there was something about not being with my biological family, my blood, the people I was supposed to be with, that bothered me, and I couldn’t let it go.

I decided I needed help. I found a therapist that specializes in adoption. While in therapy, I got the courage to message my sisters on Facebook. I told them both how much I loved them and wanted to be a part of their lives. I explained to them that I dreamed for so long about meeting my biological family, and how important it was for me to have them in my life. They both read the message and responded, but nothing changed. I still never saw or talked to them. This made me feel even worse. I took this as them not wanting or caring whether or not I was in their lives. I continued working through this in therapy. I started to feel a little better, but eventually decided I would give it another shot before working through the process of letting all of my unanswered questions, and failed relationships go.

One year later, I decided to give it One. Last. Shot. This time I reached out to my sisters separately asking them to meet me in person. My middle sister agreed but later had to cancel. I was ready to give up again when I told myself I’d have to try both sisters before giving up. My older sister surprisingly agreed. We went to dinner and talked and she was very open to having a relationship with me. My middle sister ended up joining us as well. I was hopeful.

“I have learned through all of this that your family is who you want your family to be. You don’t necessarily have to have the same blood to be family.”

Today, I hang out with my older sister all the time. We are the best of friends and I’m so happy. I see my middle sister here and there, and I’m okay with that, I take what I can get and I’ve learned to be grateful for that.

I decided in order to close this chapter I needed to find my father. With the help of my older sister and an old friend of my biological mother, we searched and searched for weeks, calling people and even knocking on people’s doors looking for answers. We eventually found him. I once saw a psychic that told me I would find my father—if I wanted to—but to make sure I’m at my strongest point in life before I look. She also told me he lived overseas. She ended up being 100% right. He lives in London.

My sister reached out to him. He didn’t seem to believe that I was his daughter, as my biological mother told him that she had a miscarriage. He gave us the name of another one of his daughters that lives in Minnesota. She reached out to me and I ended up taking a DNA test with her, that was requested by my biological father. He didn’t want to get involved with me until he knew that I was for sure his daughter. We took the DNA test and it came back 99.99%, she was my half-sister, which meant he was my father. She sent the results to my biological father, and his response was not what I was expecting. He said, “I hope that we learn from this situation, and become better mothers, and that you never know what women are capable of.” I was devastated once again. He was clearly upset about being lied to all those years ago. 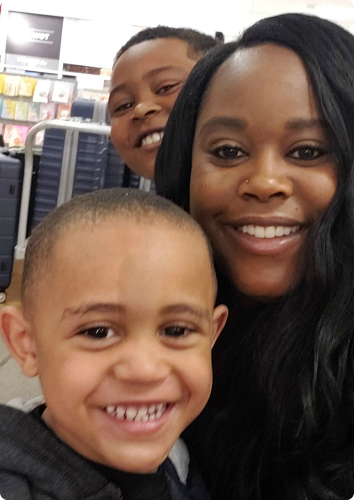 I was recently informed that my biological father has another confirmed child. A son. The same day their DNA test results came back, my father called his son and they talked. I still to this day am waiting for him to respond to me in any form. While this makes me feel rejected once again, I have to say this was the perfect time to do this because I am able to handle these feelings without it consuming my life. I’ll never know why he seems to not be interested in a relationship with me and while it hurts, I’m OK.

While I still have many, many unanswered questions, I’m at peace with the fact that I will never get all of the answers I was searching for. I have learned through all of this that your family is who you want your family to be. You don’t necessarily have to have the same blood, to be family. I have a great adoptive and biological family, and I have amazing friends, all of who I consider family.

To adoptive parents: While we all hope that things will go well on this journey, sometimes we stumble upon unexpected bumps in the road that can really be emotionally damaging. Try to be as available in every way while on our journey.

To adoptees: It took me a long time to see the light throughout all of this. We are incredibly lucky to have had a family choose us, and love us as their own. If you embark on a journey to find answers, or family members always remember that you are loved and accepted by so many people, embrace the ones who want to be a part of your life.

Thank you for reading about my experience. I wish you all luck in your adoption journey!

Submitted to Children’s Home with permission to publish. If you’d like to share your adoption story on our blog, please send us an email.