At 91, John Nightingale has few memories of his early life. Adopted at the age of three, he wonders about the circumstances surrounding his birth. Who were his parents? What circumstances led them to place him for adoption? John has always wanted to know what the name they had given him when he was born.

What he does know is that he was born in December 1928 in Saint Paul, Minnesota. His father left his mother shortly after John’s birth. Despite his mother’s best efforts to provide for her son, she eventually placed him for adoption with Catholic Charities when he was a year old.

“I believe she tried to be a good mother,” said John. “She kept me with her as long as she could.” He spent two years in an orphanage before being adopted by a loving family. John knew he was adopted, but his adoptive mother didn’t talk about it beyond acknowledging it happened. Out of respect for her, he avoided asking questions.

a skater for life

As a teenager, John took up figure skating. His talent and passion landed him in the international spotlight at the World Figure Skating

Championship and the 1952 Oslo Olympics, where he and his skating partner, Janet Gerhauser, placed sixth.

John and his wife, Helen, also a competitive skater, married in 1952 and were together for 66 years until her death in 2019. They built a life around skating – competing, coaching and teaching – while raising three sons and traveling during John’s 20-year military career until he retired as a Lt. Colonel from the Army.

a longing that wouldn’t go away When his mother died in 1973, he felt freed to pursue answers to his lingering questions about his birth.

John’s adoption records had been sealed by the courts years ago. With determination and impressive detective skills, John uncovered some information and found his way to Children’s Home and social worker, Stacy Zignego. Her guidance enabled John to petition the county for his original birth certificate. He hoped it would reveal his birth name.

“I always wanted to know what my first first name was,” said John. “It’s the beginning of my story.”

Stacy located John’s birth certificate. It included his mother’s and father’s names. The place for the newborn’s name was filled in by hand: “Not named.” John turns melancholy when he describes how he felt upon seeing that. “I was disappointed.” John’s baptismal record with the Catholic Church eventually revealed his birth name: John Robert. John was pleased to know his adopted family kept his first name. “Perhaps it was out of respect to my birth parents.”

Filling in the puzzle

Today, John lives outside St. Louis, Missouri, staying in touch with his sons, nine grandchildren and three great-grandchildren. He continues to focus on uncovering the early years of his life.

With information discovered through years of tenacious research, John’s puzzle is nearly complete. He is satisfied with what he now knows. “I didn’t want to leave this world without the information I have,” he said. “Stacy helping me do this has meant the world to me.” 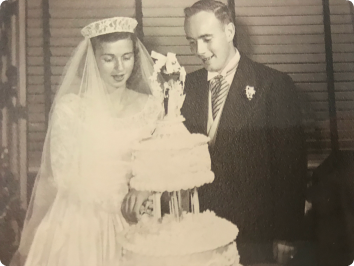