There are countless stereotypes that linger around the word “orphanage.”  Dirty, crowded, crying babies, attachment disorders, and empty stomachs are just a few examples.  The Hogar del Niño orphanage in Mixco, Guatemala truly surpasses all of these negative connotations.

My parents, older sister, and I were introduced to the Hogar del Niño completely by chance in the summer of 2009.  We were on our first medical mission trip to Guatemala when the swine flu epidemic broke out restricting us from entering hospitals or clinics, where our main work was initially intended to take place.  The horrible swine flu outbreak led us to visit Hogar del Nino, a Catholic orphanage where forty nuns house, feed, and educate 185 boys aged three to thirteen years old.

When we heard that the orphanage was located in Mixco, it automatically hit home for us.  My youngest brother, Gabriel, was adopted from Guatemala in the fall 2007, two months before Guatemala closed its doors to international adoption.  Gabriel’s birth mother was from Mixco, which just made the Hogar even more special to us.  We embarked to Guatemala in hopes of giving back to the country that gave our family the greatest gift, but we never thought we’d be given the chance to work in Gabe’s original hometown.  This was the first of many blessings in disguise for us on this journey.

Upon arriving at the orphanage, I couldn’t help but notice how beautiful it was.  There were countless blooming flowers, a lovely brick church with stain-glass windows, and, of course, lots of warm, smiling faces to greet us.  Immediately, boys of all ages came to us and held our hands and gave us sweet hugs.  They led us to the courtyard, which had a basketball and soccer court, lots of playground equipment, and games painted on the cement.  We gave the boys soccer balls and basketballs that we brought, along with chalk and bubbles.  Initially I was a little nervous about how they would react since we definitely did not have enough for each boy to have their own.  Needless to say, they completely amazed me.  Multiple boys took turns blowing bubbles, there were games of both soccer and basketball, and others took turns using different colors of the chalk.  There were no tears and no fighting, only pure gratefulness. 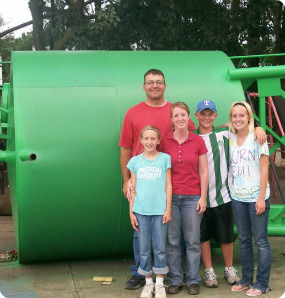 It was obvious why the children were so polite and well-behaved after we met a few of the nuns.  They are so kind-hearted and warm, and their desire to help the children in any way constantly shines.  Our group had also brought bags of beans and rice for the Hogar, since they operate solely on donations and were running low.  One of the nuns spoke to the mission leader about their need for a new water tower, which provides a steady flow of water to the whole orphanage.  The water tower was rusting from the inside out, and because it was so expensive to replace, the orphanage was being threatened to close down.  Our group was motivated to help in any way we could, but we knew that the biggest need for the orphanage was out of our hands.

After returning home from our first mission trip, it was clear to us that it wouldn’t be our last.  We simply couldn’t imagine a possibility of this amazing facility being forced to close its doors.  So, we decided to take matters into our own hands.  Thanks largely to the motivation of my mother, during the next year our family had one main focus: to raise enough money to build the orphanage a new water tower.  After hosting forty free-will offerings (along with donuts and coffee) after church, two garage sales, and one Knights of Columbus benefit, we had raised $10,000, which matched the estimate for a brand new water tower that we had received.  I had never imagined that we would reach our goal and watch excitedly as the water tower was constructed and put into place, but in the summer of 2010, we did. Since our first mission trip, I have been fortunate enough to travel back to the Hogar with my family seven additional times.  After every trip, the bond our family has with the nuns and the boys only grows stronger.  The greatest honor was being invited to stay directly at the orphanage.  The Hogar went from being a special, wonderful facility to our family to becoming a second home.  It truly amazes me how much love and trust has been shared, and it all started from the adoption of our Gabriel.  Without him, we wouldn’t have been introduced to this organization and created such an extraordinary friendship.

We have endured countless amazing experiences throughout our time in Guatemala thanks to the Hogar.  Not only do they house, feed, educate, and love almost 200 boys, but they also feed homeless men twice daily, have clothes and food handouts to women and children, hold church services, and put on celebration parties and bingo games.  The love doesn’t stop here either.  There are also two additional orphanages that are run by the same affiliation of nuns, Hogar del Niño and Hogar Madre Anna Vitiello.  Hogar del Niño has the same name as the boy’s orphanage, but is a separate orphanage that holds 100 girls ages three to fifteen.  Hogar Madre Anna Vitiello specializes in children who have been diagnosed with HIV/AIDS and provides medicine, schooling, and a safe home for these children.  These organizations solely depend on the contributions from others in order to provide all of the services it offers to the children.

Thanks to Children’s Home Society of Minnesota (the adoption agency that led us to our Gabriel), a donation site has been set up in which all proceeds go to these three wonderful orphanages.  In the past years, they were able to buy new school books for one full year that included reading, writing, math, and science subjects for every child.  This year, the Hogar del Niño boy’s orphanage was able to buy a new stove to replace the older stove, which only had two working burners.  They were also able to build a small separate building for a psychologist who visits weekly to talk to children who need help working through crisis situations.

Thank you to all who have already donated, and to those considering it, I hope you can now see what a great cause it is going to.  If anyone has any questions about the orphanages or would like more information about our trips, please don’t hesitate to contact me (brianne.giesler@my.und.edu).