Join us in celebrating ISN on its 10th anniversary of providing excellent care to children. Over the years ISN has formed a tight-knit extended family among its staff and 18 children, who now range in age from 18 months to 14 years old.

In 2006, ISN’s founder, Uma Karki, set aside her successful career to start a private children’s home that would operate differently from what she’d observed while volunteering at another facility. Uma strives to set high standards and provide loving care and attention to each of ISN’s children, who have numbered into the 20s in past years. Thanks to her hard work and perseverance, Uma has been able to reunite some of ISN’s children with their birth families. For the 18 children who remain in ISN’s care, growing up in an adoptive family is not possible for a couple of reasons; one is the lack of cultural acceptance and support for domestic adoption within Nepal, and the other is due to the current suspension of intercountry adoptions for all children except those legally relinquished by birth parents (ie: abandonment cases are not considered for intercountry adoption to the U.S.).

Children’s Home is working closely with Uma Karki as she makes plans for ISN’s future, in particular, the transition of ISN’s growing children into the community to lead productive lives once they reach adulthood, and in the search for ISN”s next home when its lease ends this coming year.

Please consider making a contribution to ISN as it 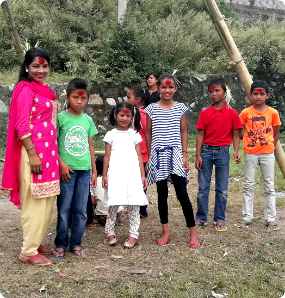 celebrates this major milestone and looks toward a bright future!