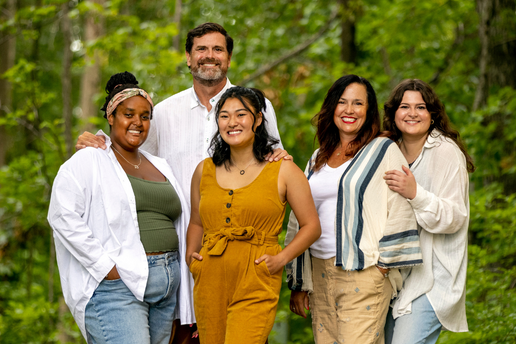 RJ Devick said when he and his wife, Teresa, started dating, he quickly realized they had very little in common. They grew up in vastly different parts of the United States —he on a Minnesota farm, she in New Mexico in a military family. They had different religious backgrounds, political views and tastes in music.

Despite their distinct differences, they bonded and eventually fell in love over a shared value that superseded what they didn’t have in common.

“We both wanted to take care of others,” said RJ. “Really, it’s everything for us.” Almost 30 years later, caring for others is still a guiding force in the Devick family, which now includes their three daughters: Grace, 24; Clare, 23, who was adopted in 2000 from South Korea; and Aster,18, who was adopted from Ethiopia in 2007.

“We believe in karma—whatever you give, you will get back more in return. That’s the case with our family and why we keep giving to Children’s Home. For many years, RJ and Teresa have made significant financial gifts to Children’s Home and have

been actively involved in fundraisers for adoption programs, orphanages and schools throughout the world.

“Children’s Home helped grow our family through adoption, and it continues to address the needs of children through foster care and other critical programs,” Teresa said. “We want to support that in every way we can.”

“We believe in karma—whatever you give, you will get back more in return,” said RJ. “That’s the case with our family and why we keep giving to Children’s Home. We are indebted to them for what they did for our family and for what they are doing for so many children around the world.”