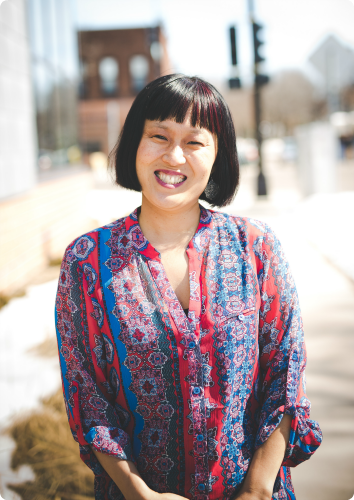 I remember the day when I first met my son at the adoption agency in Seoul, South Korea. I woke up that morning feeling a range of emotions from complete anticipation, to sheer happiness, to utter anxiety. I waited nearly a year to meet my son and now I was just hours away. As I sat in the coffee shop waiting for my visit, so many thoughts spiraled through my head. How will I feel the moment he is placed in my arms? What if he cries when I hold him? What do I even say to him? I have a small white photo album filled with pictures from that first visit. It includes many beautiful family photos of us laughing and playing together. One of my favorite pictures is where my son’s foster mother looks at him adoringly; the love radiates from her face.

The first few months after my son joined my family, we looked at the pictures in the Korean photo album each morning to help ease his transition. Most days he was eager and content to look at the photos. However, one particular day, he started to cry and became completely inconsolable. He ran to the front door, pointed to my car, and cried out, “Omma.” I panicked. How do I explain to a two year old that he can’t get in the car and be with his foster mother? I stumbled through my words, fought back my tears, and eventually managed to explain that it’s okay to be sad. I reassured him that even though his foster mother was in Korea, she still loves him.

My son has vivid memories of his life in Korea and when he shares them, the gravity of his loss is both heartbreaking and beautiful. One morning while I helped him get dressed he picked up his Korean striped monkey shirt from his foster mother, smelled it, and insisted on wearing it. Or another time when he opened the refrigerator door, pointed to the small red bottle of gochujang and confidently said, “Omma” with a happy wide grin on his face.  Recently he found a container of baby wipes in his dresser drawer. “Go to Korea when I bigger. Give to omma’s baby?” he excitedly asked. After my son joined my family, he liked to sit on the the couch and quietly stare out the front window and watch the cars and buses drive by. I used to think he enjoyed this because he is wildly obsessed with vehicles but part of me wonders if he was patiently waiting for his foster mother to return.

Adoption is complicated. I understand that as an adoptive parent with every gain I experience, there is an unspeakable loss for my son. Even though I gained a beautiful family, my son didn’t choose to be adopted. In order for me to become a mother he had to first lose his birth mother, his foster mother, his birth language, and be uprooted from everything that was familiar. I am acutely aware that my son may struggle with being an adoptee in much the same ways I did—by questioning his identity or feeling like he’s never truly accepted.

As a transracial Korean adoptee and a parent of an adopted Korean son, I understand the sense of loss he will feel as he grows up without his birth family but also how it feels to have a loss of identity. I grew up in a predominately white culture. There were moments in my childhood when I wanted to just blend in. I remember one Halloween when my best friend and I dressed up as Madonna and I thought, How can I look like a white pop star? I’m Asian. I felt so out of place. Being Korean set me apart from others and being adopted made me question if I was worthy of love.

Every day I work to build trust and understanding with my son. By having conversations about his adoption and his birth mother, my hope is that he knows he can come to me when he’s feeling lonely or scared. I will listen to him. I will reassure him that my love is unconditional.

It’s been a year and a half since my son joined my family and there are still emotionally challenging days when he misses his foster family and is sad. I can’t predict what triggers his grief, but I’m learning how to better comfort him. Like when he says, “Mommy, walk around.” I pick him up, swaddle his feet and legs in his blanket and walk around until he feels relaxed. Then I ask if he’d like to look at his Korean photo album. Although we’ve paged through it countless times, each time he talks about the pictures it helps him create meaning from his loss.  As we sit together with his head resting on my shoulder, I wonder if there’s a way I can ease his pain. Somehow take it all away. And it’s in these still moments that I choose to surrender to the grief; I know it will always be.

Motherhood is full of uncertainties. However, the one certainty I do have is hope. My hope is that my son knows he isn’t alone on his adoption journey. I am here for him now just like I was when he was first placed in my arms.

About the Author: Heather is a Korean adoptee, teacher, and a mother. She was adopted as an infant from Seoul, South Korea.  Two years ago she adopted a son who is also Korean. In her free time, she is running around the house being chased by her three-and-a-half year old “monster,” binge watching a K-drama, and plotting out her next travel adventure. She lives in Minneapolis, Minnesota with her family. You can follow here blog here: https://parenthoodpending.wordpress.com.