Katherine Norrie’s favorite story is about the day her parents, Forrest and Mary, adopted her.

For years, the couple prayed for the chance to be parents. When they received a call in 1977 with news that a baby girl needed a permanent family, they drove to Minneapolis to pick her up. Friends heard the news of the new baby, whom Forrest and Mary named Katherine, and formed a caravan to the family’s farm to celebrate her arrival. From that day forward, Katherine grew up surrounded by love.

Katherine enjoyed traveling and outings with Mary, and formed a special bond with Forrest. A hard-working farmer, he relished raising her on the family farm where he was born.

“I had the happiest childhood ever,” Katherine said. “I had this enormous family who cared for me deeply and loved me – and they still do!”

searching as a family

When Katherine became a mother, she understood the magnitude of her birth parents’ decision. Katherine’s yearning to meet her birth mother deepened when Mary confided that Forrest asked to find and thank the woman who helped them become parents.

“My dad, who is very stoic, wanted to say thank you to a stranger,” Katherine said.

Katherine searched for her birth mother with the help of our post adoption services. A social worker sent two letters to Katherine’s biological mother. Katherine received a call in February 2018 that her birth mother, Judy, had responded. 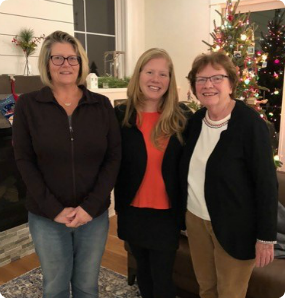 41 years apart, Judy was able to hug Katherine for the first time. Katherine also learned that she is the oldest of Judy’s 10 children.

The day after they met, Katherine brought Judy, along with two of her newfound siblings and two nephews, to the farm where she grew up. Forrest and Mary’s families greeted Judy with a party at the farm – just like the day Katherine was adopted – and Forrest finally had the chance to thank her.

Katherine learned that when Judy became pregnant at age 18, she hid the pregnancy from her friends and family. The young expectant mother had been working in a fabric store while Katherine’s biological father was finishing high school. Without a plan for raising a child at such a young age, Judy agreed to place Katherine for adoption.

Katherine said she hopes someday to search for her biological father as well. For now, she is settling into building relationships with her new family members.

Since meeting her biological family, Katherine has enjoyed discovering common connections. Like Katherine, one of her sisters graduated from St. Olaf College, as did her sister-in-law – her brother Erik’s wife. Katherine accompanied Judy’s uncle George to the St. Olaf’s annual Christmas choral concert.

Another connection came through teaching: Katherine has been teaching art at Northfield High School for two decades. She learned that Judy’s grandfather was the superintendent of the high school in Hector where she grew up.