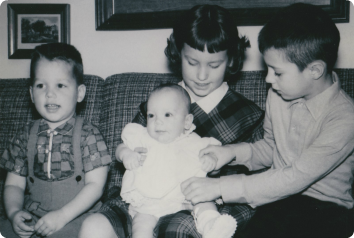 Though 92-year-old Betty says she hasn’t “thought about adoption for a long time,” the ripples of how adoption touched her life are throughout her home. Photos of smiling children and grandchildren grace her fireplace mantle. A close up of her and her husband’s hands hangs in the kitchen – a visual reminder of the years and memories they created together as a family.

Over banana bread and Swedish coffee cake with cream cheese frosting, she recollects how her family grew through adoption many years ago. “Milbert and I were married in 1948 and I wanted a baby right off the bat. Two years later, I went to the doctor and found out I wasn’t going to get pregnant.”

The couple turned to a local, Lutheran adoption agency in Sioux Falls, South Dakota and began to make plans. They were told that it could take years, so they focused on work and imagining the baby girl they had decided they would name Rebecca Susan.

One day after their third wedding anniversary, Milbert made a surprise visit to Betty at the Sears counter where she worked. “Becky Sue is here. We can see her at 1 p.m.,” he exclaimed. Their minds whirled as they tried to work during the two hours they had left before meeting their daughter. After Becky Sue, the family continued to change and grow. They scraped together $10,000 through small loans from family and friends to buy a drug store in Wessington Springs, South Dakota. During that year, they also sponsored a “displaced person” – now commonly referred to as a refugee. “We took care of him for a year: gave him a place to live, fed him and helped get him established.” Then, they welcomed their first son, Jeffrey, to the family.

They also fostered a child who was born prematurely and was blind. “He was the same age as Becky – four- when he joined us. We were his fourth foster home,” Betty recalls. “He was such a good kid and we had him for about a year and a half. We fenced off the backyard so that he and Becky could play together.”

“When we made the plan to move to Minnesota, we couldn’t take him with us because he was a ward of South Dakota,” explains Betty. “That has haunted me.”

After moving to Mound, Minnesota, they decided to adopt again – this time through Lutheran Social Service of Minnesota (LSS). In 1958, the family welcomed Michael. Then in 1960, Lisa. Betty mentions that she would like to thank LSS and the caseworkers, “they were wonderful to work with.”

As the family grew, so did the memories. In their lakeside home, the children paddled around the fishing boat and played at the park together. Only returning home after hearing Betty ring the dinner bell.

Even with four children, Betty continued to help others. “The family across the street from us had also adopted from LSS. So, my neighbor and I would volunteer at the house for the unwed mothers,” Betty says. “There was one gal that asked us to check on her when she left the home. So we would visit her and show her how to care for that baby.”

As Betty picks up pictures of each of her children to adoringly talk about their personalities and lives, her phone rings – her daily call from Lisa. Betty is immensely proud of her family and it’s these daily acts of love that shine through the memories of the past, a love that has carried the family through the highs and lows of life.

Building an endowment for the future

After reflecting on 70-year history with LSS, Betty looks to the future and the impacts she can make. “I want to know that I’m helping children,” she explains. “I read about what’s going on in the newspapers and I really want to help these kids.”

Having witnessed the impact of endowments in the past, the pamphlet on the Norelius Society caught her eye when it fell out of the materials about LSS services. “It felt like a sign from God,” she exclaims. So she began an endowment fund and committed to giving $50,000.

Looking back on her long history with LSS and the important services that it provides, Betty states, “I can’t think of a better place to put my money.”