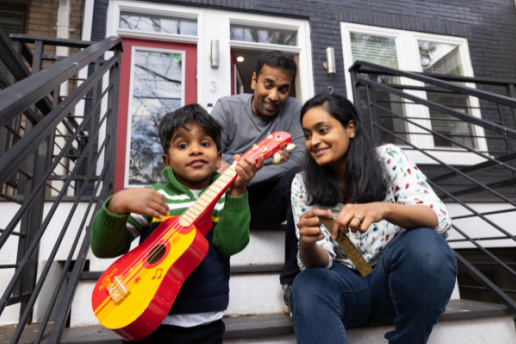 As a child growing up in India, Vidya’s dream was to build a family through adoption. Her family moved to the Philippines when she was seven, then to Japan, and finally to the United States, settling in Ohio, where her parents still live. Throughout her life, Vidya held on to that dream of adopting a child.

“Luckily, I met someone who was on board with that,” Vidya said of her husband, Sandeep, who also was born and raised in India. As self-described “recovering academics,” now living and working in Washington, D.C., Vidya and Sandeep completed their advanced degrees a few years ago and decided it was the right time to look into adopting a child from India.

“Children’s Home has been great,” said Vidya. “From our first conversation, I really appreciated how practical and realistic they were. Children’s Home knows this is a lifelong commitment, and it has to be the right decision for the right reasons. They provided the support we needed through the entire process.”

Little did Vidya and Sandeep realize how much support they would need as their efforts to adopt became even more complex with the onset of a worldwide pandemic.

Vidya and Sandeep remember the first time they saw the little boy named Siddharth with whom they had been matched. “The social worker sent us a video of him,” said Vidya. “We both started bawling, knowing this was our son.”

Sandeep said it’s hard to explain the strong feelings of attachment they felt. “At first, it was a sense of commitment and responsibility. Love grew from that first moment on.” By January 2020, the adoption process in India was finalized, and on March 10, Siddharth’s U.S. passport had come through. However, the world as we once knew it was quickly changing.

The following day, March 11, 2020, Vidya began searching for a ticket to India. Sandeep, meanwhile, was being sworn in as a U.S. citizen when he got a text from family that India, in response to the spread of the coronavirus, had closed its international borders and severely restricted travel within the country. He met Vidya in a park, where they sat down and cried, knowing that uniting with their son anytime soon seemed improbable, if not impossible. Augmenting those more formal efforts, Vidya and Sandeep tapped into their vast network of relatives, friends and distant acquaintances. Those efforts resulted in finding a single seat on one of the few Air India flights from Chicago to New Delhi and hounding the Indian consulate to grant an emergency visa.

Sandeep flew to New Delhi in July. After quarantining for two weeks and facing travel restrictions within India, he explored multiple ways to get to the orphanage — eight hours away — to pick up Siddharth.

Ultimately, the family secured a one-day permit to make the 16-hour round-trip to and from the orphanage. They left Sandeep’s parents’ home before 6 a.m. to assure they arrived back by nightfall. It was another three weeks before Sandeep, his parents and Siddharth traveled to the U.S. where Vidya had been anxiously awaiting their arrival.

Vidya had always pictured the moment she would meet her adopted child in person. Understandably, that scene played out differently than Vidya had envisioned. But meeting Siddharth in person exceeded her hopes and dreams.

Today, Vidya and Sandeep are enjoying the rewards of life with a three-year-old. “Siddharth is beautifully unique and incredibly energetic,” said Vidya. “He wakes up ready to go at 7 a.m. and doesn’t stop until 10 p.m. Yes, we’re exhausted but couldn’t be more in love.”