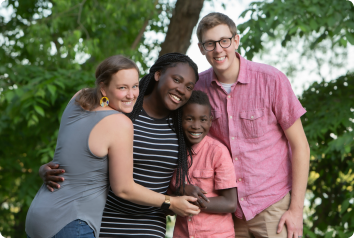 Before they married, Ryan and Emily talked about becoming adoptive parents. After serving in Uganda as Peace Corps volunteers and returning to Minnesota in 2013, they attended an adoption information meeting at Children’s Home and LSS.

“We realized the greatest need was for adoptive parents for older kids in foster care,” said Ryan. “We walked away thinking this is something we wanted to do in about 10 years!”

Ten months later, they couldn’t stop thinking about adoption. Less than a year after that first exploratory session, they returned for two-day classes and started the adoption process.

They were open to adopting a sibling group and to children of any race. “We were hesitant at first about being a transracial family,” explained Ryan. “I always believed that it’s best for kids to be in families of the same race. After our training, we understood the need for adoption of older kids. If we could provide a permanent home for children of any race who might otherwise age out of foster care, then we could make a difference.”

From Zero to 60: Building the Car While Driving Emily and Ryan’s home study was completed in July 2015. By November, they became pre-adoptive foster parents of 14-year-old Keke and 9-year-old KJ. The adoption was finalized the following August.

“It was a whirlwind,” said Emily. “One night it’s just the two of you; the next day you wake up, you’re 30 years old, you have two kids in the house — and one of them is a teenager!

“It’s like going from zero to 60 mph, and building the car while you’re driving it. New routines. Meal prep and schoolwork. Setting boundaries.”

Ryan admits to feeling overwhelmed at times. “You can’t prepare for what the experience actually feels like. You quickly realize you don’t have all the answers, and that’s okay.”

Wanting to be the best parents they could be, Ryan and Emily researched ways to parent older children. They created a web of support with family and friends. They built an intentional community by living in a diverse and welcoming neighborhood.

“When you first think of how you want to parent, you want to fill the house with laughter: we’d have dance
parties in the kitchen and take family trips,” said Ryan. “We quickly realized the most important thing we could give our children was structure and routine, especially if they’re not used to it. That was a surprise for me.”

Ryan and Emily say their biggest challenge as parents of older children is setting boundaries. Being relatively young has made it somewhat more difficult to establish parental authority, especially with Keke who had often been responsible for her younger sibling.

“We had to assure Keke that she was allowed to be a teenager, and didn’t have to figure out how to provide
for herself and her brother,” said Emily. They both are getting used to the “funny looks” from people who suddenly realize these 33-year-olds are
the parents of a high school graduate and an eighth grader.

Emily and Ryan appreciate how valuable it is for their children to be biological siblings. “We made a family.
We also joined a family. We have a covenant with each other, and we’ll have it forever.”

Give Now to Support Children’s Home